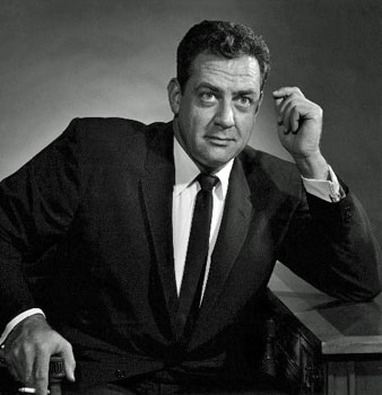 In the first ten years of his life, Raymond Burr moved from town to town with his mother, a single parent who supported her little family by playing the organ in movie houses and churches. An unusually large child, he was able to land odd jobs that would normally go to adults. He worked as a ranch hand, a traveling tinted-photograph salesman, a Forest service fire guard, and a property agent in China, where his mother had briefly resettled. At 19, he made the acquaintance of film director Anatole Litvak, who arranged for Burr to get a job at a Toronto summer-stock theater. This led to a stint with a touring English rep company; one of his co-workers, Annette Sutherland, became his first wife.

After a brief stint as a nightclub singer in Paris, Burr studied at the Pasadena Playhouse and took adult education courses at Stanford, Columbia, and the University of Chunking. His first New York theatrical break was in the 1943 play Duke in Darkness. That same year, his wife Sutherland was killed in the same plane crash that took the life of actor Leslie Howard. Distraught after the death of his wife, Burr joined the Navy, served two years, then returned to America in the company of his four-year-old son, Michael Evan Burr (Michael would die of leukemia in 1953).

Told by Hollywood agents that he was overweight for movies, the 340-pound Burr spent a torturous six months living on 750 calories per day. Emerging at a trim 210 pounds, he landed his first film role, an unbilled bit as Claudette Colbert's dancing partner in Without Reservations (1946). It was in San Quentin (1946), his next film, that Burr found his true metier, as a brooding villain. He spent the next ten years specializing in heavies, menacing everyone from The Marx Brothers (1949's Love Happy) to Clark Gable (1950's Key to the City) to Montgomery Clift (1951's A Place in the Sun) to Natalie Wood (1954's A Cry in the Night). His most celebrated assignments during this period included the role of melancholy wife murderer Lars Thorwald in Hitchcock's Rear Window (1954) and reporter Steve Martin in the English-language scenes of the Japanese monster rally Godzilla (1956), a characterization he'd repeat three decades later in Godzilla 1985.

While he worked steadily on radio and television, Burr seemed a poor prospect for series stardom, especially after being rejected for the role of Matt Dillon on Gunsmoke on the grounds that his voice was too big. In 1957, he was tested for the role of district attorney Hamilton Burger in the upcoming TV series Perry Mason. Tired of playing unpleasant secondary roles, Burr agreed to read for Burger only if he was also given a shot at the leading character.

Producer Gail Patrick Jackson, who'd been courting such big names as William Holden, Fred MacMurray, and Efrem Zimbalist Jr., agreed to humor Burr by permitting him to test for both Burger and Perry Mason. Upon viewing Burr's test for the latter role, Perry Mason creator Erle Stanley Gardner jumped up, pointed at the screen, and cried "That's him!" Burr was cast as Mason on the spot, remaining with the role until the series' cancellation in 1966 and winning three Emmies along the way. Though famous for his intense powers of concentration during working hours -- he didn't simply play Perry Mason, he immersed himself in the role -- Burr nonetheless found time to indulge in endless on-set practical jokes, many of these directed at his co-star and beloved friend, actress Barbara Hale. Less than a year after Mason's demise, Burr was back at work as the wheelchair-bound protagonist of the weekly detective series Ironside, which ran from 1967 to 1975.

His later projects included the short-lived TVer Kingston Confidential (1976), a sparkling cameo in Airplane 2: The Sequel (1982), and 26 two-hour Perry Mason specials, lensed between 1986 and 1993. Burr was one of the most liked and highly respected men in Hollywood. Fiercely devoted to his friends and co-workers, Burr would threaten to walk off the set whenever one of his associates was treated in a less than chivalrous manner by the producers or the network.

Burr also devoted innumerable hours to charitable and humanitarian works, including his personally financed one-man tours of Korean and Vietnamese army bases, his support of two dozen foster children, and his generous financial contributions to the population of the 4,000-acre Fiji island of Naitauba, which he partly owned. Despite his unbounded generosity and genuine love of people, Burr was an intensely private person. After his divorce from his second wife and the death from cancer of his third, Burr remained a bachelor from 1955 until his death.

Stricken by kidney cancer late in 1992, he insisted upon maintaining his usual hectic pace, filming one last Mason TV movie and taking an extended trip to Europe. In his last weeks, Burr refused to see anyone but his closest friends, throwing "farewell" parties to keep their spirits up. Forty-eight hours after telling his longtime friend and business partner Robert Benevides, "If I lie down, I'll die," 76-year-old Raymond Burr did just that -- dying as he'd lived, on his own terms.
Available Films:
Trivia:
While working with Errol Flynn, Flynn told him that if he died with ten dollars in his pocket he hadn't done a good job. This inspired him to always share his wealth with all.

Suffered eye strain from always having to look upwards while in a wheelchair on the Ironside (1967) set.

Was a lounge singer in his younger days.

Before dying from cancer he threw parties to say farewell to many of his friends.

Longtime companion of Robert Benevides. Benevides was a young actor Burr met on the set of the original Perry Mason (1957) television series. He was 13 years Raymond's junior. He had a small role in the sci-fi film The Monster That Challenged the World (1957), billed as Bob Benevedes.

His official biography stated that he had been married three times, but two of his wives and one child had died. However, these details were fabricated in an attempt to hide the fact that Burr was gay. Only one brief marriage had actually occurred, and it had ended in divorce. The other two marriages and the child were fiction.

After he was diagnosed with kidney cancer, he refused to undergo surgery so that he could star in his final television movies: The Return of Ironside (1993) and Perry Mason: The Case of the Killer Kiss (1993).

Was considered for the role of Matt Dillon in Gunsmoke (1955). In an August 23, 1975, article in TV Guide called "When Chester Forgot to Limp" commemorating trivia from the show as it was about to leave the air, the show's first producer Charles Marquis Warren recalled, "His voice was fine, but he was too big. When he stood up, his chair stood up with him". William Conrad, who played Matt Dillon on radio, was rejected for the TV version for similar reasons. In a memorial article in TV Guide published shortly after Burr's death, the original producers of Perry Mason (1957) almost rejected Burr for that role, again because Burr was overweight. He went on an intensive diet to get down to a size acceptable to the producers.
Explore the simpler time of yesteryear...
A time when men and women were truly glamorous. A time when you could watch any movie with your children and not have to worry about gratuitous sex or violence – yet enjoy all the lustful inferences and edge-of-your-seat suspense.
Welcome to The Timeless Theater!
We're in the process of identifying which of our films are in the Public Domain, and offering these for sale on DVD.
​Please stay Tuned...!
Check out our new Film Noir Collection:
Coffee Mugs!
Phone Cases!
iPad Cases!
More coming soon!