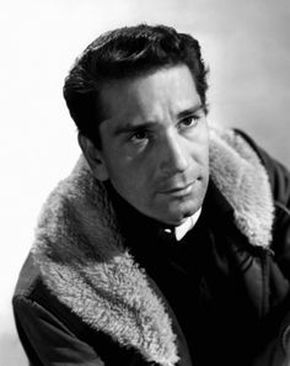 Richard Conte was born Nicholas Richard Conte on March 24, 1910, in Jersey City, New Jersey, the son of an Italian-American barber. The young Conte held a variety of jobs before becoming a professional actor, including truck driver, Wall Street clerk and singing waiter at a Connecticut resort. The gig as a singing waiter led to theatrical work in New York, where in 1935, he was discovered by actors Elia Kazan and Julius "Julie" Garfinkle (later known as John Garfield) of New York City's Group Theatre.

Kazan helped Conte obtain a scholarship to study acting at the Neighborhood Playhouse, where he excelled. Conte made his Broadway debut late in "Moon Over Mulberry Street" in 1939, and went on to be featured in other plays, including "Walk Into My Parlor." His stage work lead to a movie job, and he made his film debut in Heaven with a Barbed Wire Fence (1939), in which he was billed as "Nicholas Conte." His career started to thrive during the Second World War, when many Hollywood actors were away in the military.

Signing on as a contract player with 20th Century-Fox in 1942, Conte was promoted by the studio as, ironically, as "New John Garfield," the man who helped discover him. He made his debut at Fox, under the name "Richard Conte," in Guadalcanal Diary (1943). During World War II Conte appeared mostly as soldiers in war pictures, though after the war he became a fixture in the studio's "film noir" crime melodramas. His best role at Fox was as the wrongly imprisoned man exonerated by James Stewart's reporter in Call Northside 777 (1948) and he also shined as a trucker in Thieves' Highway (1949).

In the 1950s Conte essentially evolved into a B-movie actor, his best performances coming in The Blue Gardenia (1953) and Highway Dragnet (1954). After being set free of his Fox contract in the early 1950s, his career lost momentum as the film noir cycle exhausted itself, although he turned in a first-rate performance as a vicious but philosophical gangster in Joseph H. Lewis film-noir classic The Big Combo (1955).

Conte appeared often on television, including a co-starring gig on the syndicated series The Four Just Men (1959), but by the 1960s his career was in turnaround. Frank Sinatra cast him in his two Tony Rome detective films, the eponymous Tony Rome (1967) and Lady in Cement (1968), but Conte eventually relocated to Europe. He directed Operation Cross Eagles (1968), a low-budget war picture shot in Yugoslavia in which he also starred in with a not-quite washed-up Rory Calhoun.

Conte's last hurrah in Hollywood role was as Don Corleone's rival, Don Barzini, in The Godfather (1972), which many critics and filmmakers, including the late Stanley Kubrick, consider the greatest Hollywood film of all time. Ironically, Paramount - which produced "The Godfather" - had considered Conte for the title role before the casting list was whittled down to Laurence Olivier and Marlon Brando, who won his second Best Actor Oscar in the title role. After "The Godfather," Conte - whose character was assassinated in that picture, so does not appear in the equally classic sequel - continued to appear in European films.

Richard Conte was married to the actress Ruth Storey, with whom he fathered film editor Mark Conte. He died of a heart attack on April 15, 1975 at the age of 65.
- IMDb Mini Biography By: Jon C. Hopwood

Available Films:
Trivia:
He was one of the many actors considered by Paramount for the title role of Don Corleone in The Godfather (1972). The movie originally was intended to be a low-budget production set in contemporary times, but after the phenomenal success of the book, the budget was increased. Conte's Italian heritage helped his cause, as Paramount production head Robert Evans wanted the film to be authentically Italianm which was the reason the Italian American Francis Ford Coppola was hired to direct. Conte's rivals for the role reportedly included fellow Italian-American Ernest Borgnine, but as the prestige of the picture increased along with the budget, A-list actors began to be considered for the role, including two-time Oscar-winner Anthony Quinn and the legendary Orson Welles.

Burt Lancaster, whose superstar status had dimmed but who had the advantage of having played an Italian prince in Luchino Visconti's The Leopard (1963), actively campaigned for the role. Ironically, Visconti had wanted to cast Laurence Olivier in The Leopard (1963) (but was overruled by his producer who wanted a box office star), the actor who quickly became the favorite to play the Mafia chieftain. Olivier was sounded out by Paramount brass about the part, and he was open to their offer. Then considered the world's greatest actor, Olivier wanted to accept the role but ultimately could not due to illness. After the long-shot Marlon Brando was cast as Don Corleone at the insistence of Coppola, Conte was cast in the role of his rival, Don Barzini.
Explore the simpler time of yesteryear...
A time when men and women were truly glamorous. A time when you could watch any movie with your children and not have to worry about gratuitous sex or violence – yet enjoy all the lustful inferences and edge-of-your-seat suspense.
Welcome to The Timeless Theater!
We're in the process of identifying which of our films are in the Public Domain, and offering these for sale on DVD.
​Please stay Tuned...!
Check out our new Film Noir Collection:
Coffee Mugs!
Phone Cases!
iPad Cases!
More coming soon!