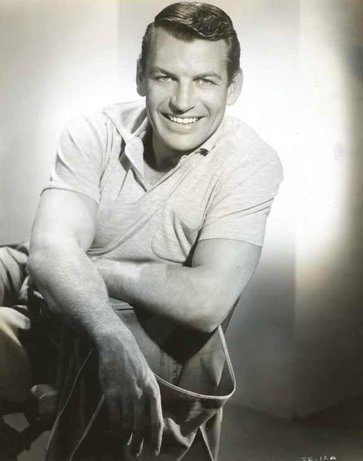 A holder of a BA degree from the University of San Francisco, Richard Egan was an Army judo instructor during World War II. While working towards his MA in theatre at Stanford University, the rugged Egan was discovered by a Warner Bros. talent scout. After his apprenticeship in supporting roles, Egan was signed as a leading man by 20th Century-Fox, where he was touted as "another Gable."

Most comfortable in brawling adventure films, Egan proved a capable dramatic actor in such films as A View from Pompey's Head (1955). Many of his starring appearances in the 1960s were in such esoterica as Esther and the King (1960) and The 300 Spartans (1962) and in foreign-filmed westerns.

In 1962, Egan starred as Jim Redigo, foreman of a sprawling New Mexico ranch, in the contemporary western TV series Empire; for its second season, the series was shortened from one hour to thirty minutes per week, and retitled Redigo. During his last decade, Richard Egan was a prolific dinner-theatre star throughout the U.S., and also appeared as Samuel Clegg II on the TV daytime drama Capitol.

A devout Catholic, who attended daily mass, Egan didn't marry until he was well into his 30's, an advanced age for the time. He believed marriage was a lifetime commitment and was waiting for the right woman to come along.

Well known for being a gracious actor, and a favorite among stuntmen. He was deemed an "Honorary Stuntman" by the Stuntmen's Association of America.

In the 1950s, Mr. Egan was slated to star in the title role of Prince Namor, The Sub-Mariner in a television based on the Timley/Atlas/Marvel Comics Superhero. The series never materialized and it is believed that no pilot film had ever been made.
Explore the simpler time of yesteryear...
A time when men and women were truly glamorous. A time when you could watch any movie with your children and not have to worry about gratuitous sex or violence – yet enjoy all the lustful inferences and edge-of-your-seat suspense.
Welcome to The Timeless Theater!
We're in the process of identifying which of our films are in the Public Domain, and offering these for sale on DVD.
​Please stay Tuned...!
Check out our new Film Noir Collection:
Coffee Mugs!
Phone Cases!
iPad Cases!
More coming soon!