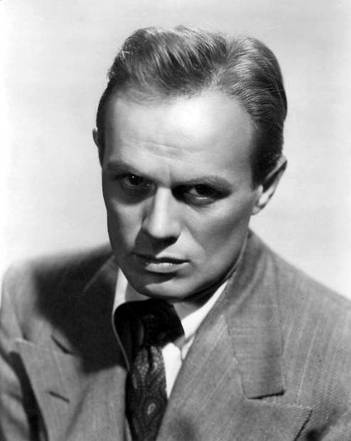 The son of a traveling salesman, actor Richard Widmark had lived in six different Midwestern towns by the time he was a teenager. He entered Illinois' Lake Forest College with plans to earn a law degree, but gravitated instead to the college's theater department. He stayed on after graduation as a drama instructor, then headed to New York to find professional work. From 1938 through 1947, Widmark was one of the busiest and most successful actors in radio, appearing in a wide variety of roles from benign to menacing, and starring in the daytime soap opera "Front Page Farrell." He did so well in radio that he'd later quip, "I am the only actor who left a mansion and swimming pool to head to Hollywood."

Widmark's first stage appearance was in Long Island summer stock; in 1943, he starred in the Broadway production of Kiss and Tell, and was subsequently top billed in four other New York shows. When director Henry Hathaway was looking for Broadway-based actors to appear in his melodrama Kiss of Death (1947), Widmark won the role of giggling, psychopathic gangster Tommy Udo. And the moment his character pushed a wheelchair-bound old woman down a staircase, a movie star was born. (Widmark always found it amusing that he'd become an audience favorite by playing a homicidal creep, noting with only slightly less amusement that, after the release of the film, women would stop him on the street and smack his face, yelling, "Take that, you little squirt!") The actor signed a 20th Century Fox contract and moved to Hollywood on the proviso that he not be confined to villainous roles; the first of his many sympathetic, heroic movie parts was in 1949's Down to the Sea in Ships. After his Fox contract ended in 1954, Widmark freelanced in such films as The Cobweb (1955) and Saint Joan (1957), the latter representing one of the few times that the actor was uncomfortably miscast (as the childish Dauphin).

In 1957, Widmark formed his own company, Heath Productions; its first effort was Time Limit, directed by Widmark's old friend Karl Malden. Widmark spent most of the 1960s making films like The Alamo (1960) and Cheyenne Autumn (1964), so that he could afford to appear in movies that put forth a political or sociological message. These included Judgment at Nuremberg (1961) and The Bedford Incident (1965). A longtime television holdout, Widmark made his small-screen debut in Vanished (1970), the first two-part TV movie. He later starred in a 1972 series based upon his 1968 theatrical film Madigan. And, in 1989, he was successfully teamed with Faye Dunaway in the made-for-cable Cold Sassy Tree.

Richard Widmark was married for 55 years to Jean Hazelwood, a former actress and occasional screenwriter who wrote the script for her husband's 1961 film The Secret Ways (1961). Their daughter Anne married '60s baseball star Sandy Koufax. Widmark died at age 93 in 2008, of health complications following a fractured vertebra.

Available Films:
Trivia:
His sole Academy Awards nomination was for best actor in a supporting role for Kiss of Death (1947) in 1948. Though he had won the Golden Globe for the role, he lost the Oscar to Edmund Gwenn in Miracle on 34th Street (1947).

When Kiss of Death (1947) was released to theaters in 1947, 20th Century Fox's publicity department encouraged theater owners to "Sell Richard Widmark!" Fox's publicity manual advised theaters to have a local printer make up "Wanted" with Widmark's face on them to advertise the film, in which he made his debut. The part was small, but Widmark made it one of the most indelible performances in the history of cinema.

Despite playing heartless killers and bigots on film, he personally denounced all kinds of violence and the usage of guns. He admitted that once he went fishing and regretted the fact he caught a trout and took its life. He also apologized profusely to Sidney Poitier during the shoot of the movie No Way Out (1950) after filming scenes together which called for Widmark to spew out racist remarks.

John Wayne/Richard Widmark is the sign/countersign used by soldiers holding the Alamo in Viva Max (1969).

His acting idol was Spencer Tracy.

Good friends with Sidney Poitier. They co-starred in three films together.

From Sidney Poitier's speech about Widmark at the D. W. Griffith Award for Life Achievment: "... the generosity of spirit that lights his way will also warm your heart...".

Very touched by Sidney Poitier presenting him with the D. W. Griffith Lifetime Achievment Award in 1990, Widmark said to his old friend, "Sid, I can't believe you came all the way to California to do this for me." Poitier replied, "For you I would have walked!".

Was Frank 'Lefty' Rosenthal's first choice to play the character based on him in Casino (1995). Being that Widmark was 80 years old at the time, the role eventually went to Robert De Niro.

[speaking in 1976] "The heavies in my day were kid's stuff compared to today. Our villains had no redeeming qualities. But there's a new morality today. A villain is a guy with a frailty. Heroes are villains."

[on his giggling psychopathic killer in his debut film Kiss of Death (1947)] "I'd never seen myself on the screen, and when I did, I wanted to shoot myself. That damn laugh of mine! For two years after that picture, you couldn't get me to smile. I played the part the way I did because the script struck me as funny and the part I played made me laugh, the guy was such a ridiculous beast."

"Marilyn Monroe wanted to be this great star but acting just scared the hell out of her. That's why she was always late--couldn't get her on the set. She had trouble remembering lines. But none of it mattered. With a very few special people, something happens between the lens and the film that is pure magic. And she really had it."

[on Spencer Tracy] "What an actor should be is exemplified, for me, by him. I like the reality of his acting. It's so honest and seems so effortless, even though what Tracy does is the result of damn hard work and extreme concentration. Actually, the ultimate in any art is never to show the wheels grinding. The essence of bad acting, for example, is shouting. Tracy never shouts. He's the greatest movie actor there ever was."
Explore the simpler time of yesteryear...
A time when men and women were truly glamorous. A time when you could watch any movie with your children and not have to worry about gratuitous sex or violence – yet enjoy all the lustful inferences and edge-of-your-seat suspense.
Welcome to The Timeless Theater!
We're in the process of identifying which of our films are in the Public Domain, and offering these for sale on DVD.
​Please stay Tuned...!
Check out our new Film Noir Collection:
Coffee Mugs!
Phone Cases!
iPad Cases!
More coming soon!