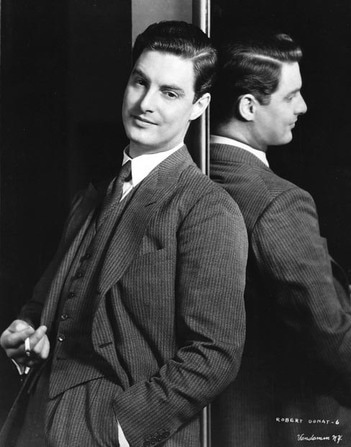 Robert Donat's pleasant voice and somewhat neutral English accent were carefully honed as a boy because he had a stammer and took elocution lessons starting at age 11 to overcome the impediment. It was not too surprising that freedom from such a vocal embarrassment was encouragement to act. His other handicap, acute asthma, did not deter him. At the age of 16 he began performing Shakespeare and other classic roles in a number of repertory and touring companies throughout Britain. In 1924 he joined Sir Frank Benson's repertory company, and later he was with the Liverpool Repertory Theater.

His work was finally noticed by Alexander Korda, who gave him a three-year film contract. Three minor films were followed by his role as Katherine Howard's lover, Thomas Culpepper, in the hit The Private Life of Henry VIII. (1933). Donat's style of acting, whether comic or dramatic, was usually reserved, with the subtleties of face and voice being his talents to complement the role. A top draw in Britain, he went to Hollywood for The Count of Monte Cristo (1934), but he did not care for the Hollywood scene--the fishbowl lifestyle of the movie star. "Cristo" gave him the opportunity for Captain Blood (1935), but he eventually declined. (With a nod to hindsight, it is hard to think of anyone but a fresh-faced Flynn doing the role.) Although he would have contracts with MGM, Warner Bros. and RKO through the remainder of the 1930s, he begged off many a film role or broke commitments, ostensibly because of health problems, though, along with being finicky about roles, he was also such a conscientious actor that lack of confidence sometimes stymied his forward progress.

Hollywood usually had to shoot in England if it wanted him badly enough. And that was not a problem after the box office reception given The 39 Steps (1935), the big hit for Alfred Hitchcock. There was a hint of whimsy in Donat's face that worked especially well with the sophisticated comedic elements that crept into several of his dramatic roles. His portrayal of individualist Canadian Richard Hannay--which registered with North Americans both above and below the 49th parallel--in "Steps" was the first of such popular characters. Some of Hitch's famous on-the-set practical jokes ensued on the first day of shooting "Steps." The first scene was the escape on the moors from the master spy's henchmen by Donat and Madeleine Carroll handcuffed together. Donat and Carroll had not met before this, and Hitchcock handcuffed them together hours before filming so that they could get very well acquainted. He insisted he had misplaced the key when in fact he had slipped it to a studio security officer for safekeeping.

Hitchcock attempted to land Donat for three other roles, Sabotage (1936) and Secret Agent (1936) and Rebecca (1940), but illness, commitments, and more illness, respectively, supposedly kept Donat from accepting each. Hollywood would be treated in kind, for Donat was more dedicated to stage work. Hollywood did get him for The Citadel (1938), for which he was nominated for a Best Actor Oscar. He won the Oscar the next year for perhaps his best known role in Goodbye, Mr. Chips (1939) (MGM's with Greer Garson). Since 1939 was one of the most competitive film years in Hollywood history, Donat's reward for his mild Mr. Chipping was something of a stunner. This was the year of Gone with the Wind (1939), and Clark Gable as Rhett Butler seemed a shoo-in for best actor. But there is something of a myth that since both pictures were from MGM and "Wind" had so many nominations (including best actor, actress, and picture), MGM head and strongman Louis B. Mayer used his weight to spread the wealth toward "Chips".

Unlike other British actors who came to work in America during World War II, Donat stayed in Britain. He did mostly theater but also some British films--only four--with one for Korda and one for Carol Reed. Only six more films were allotted Donat after the war and into the 1950s, all but one British productions. He starred, directed and co-wrote The Cure for Love (1949) and starred in The Magic Box (1951), a well-crafted and delightful (if a bit fictionalized) salute to the history of the British film industry. By 1955, all of Donat's acting efforts required a bottle of oxygen kept off stage and at the ready as his health continued to turn toward the worse. The Inn of the Sixth Happiness (1958), a Twentieth Century Fox production shot in the UK, was Donat's final film. His fragility was poignantly obvious on screen, and he died shortly after the film was finished. He received a posthumous Special Citation from the USA National Board of Review and was nominated for a Best Actor Golden Globe. It was a career for Robert Donat that should have gone on, yet it was filled with many notable screen memories just the same.
- IMDb Mini Biography By: William McPeak

Available Films:
Trivia:
His last words on screen are: "We shall not see each other again, I think". "Farewell, Jen-Ai". (Spoken to 'Ingrid Bergman's' character 'Jen-Ai' ("the one who loves people") in The Inn of the Sixth Happiness (1958)). He passed away shortly after filming was completed.

He was originally scheduled to play the title role in Captain Blood (1935) but withdrew before shooting began, which created an opportunity for Errol Flynn to become a star.

Was the favourite actor of Judy Garland, who wrote a fan letter to him after seeing his performance in The Count of Monte Cristo (1934).

"I never had any real security in my life until I found the false security of stardom."

"One of the reasons why so few actors are successful both on the stage and on the screen is that too many film actors look upon filming as a rather boring, well-paid job. Their performances in front of the camera, if also rather boring, are not quite so much of a joke."

"The chief thing in my mind was that I must appear dashing. I distinctly remember in The Count of Monte Cristo (1934) pulling my shoulders back and trying to look handsome."
Explore the simpler time of yesteryear...
A time when men and women were truly glamorous. A time when you could watch any movie with your children and not have to worry about gratuitous sex or violence – yet enjoy all the lustful inferences and edge-of-your-seat suspense.
Welcome to The Timeless Theater!
We're in the process of identifying which of our films are in the Public Domain, and offering these for sale on DVD.
​Please stay Tuned...!
Check out our new Film Noir Collection:
Coffee Mugs!
Phone Cases!
iPad Cases!
More coming soon!