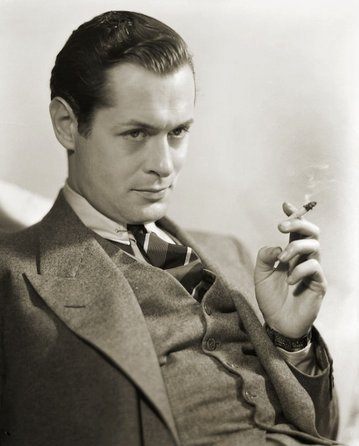 Actor/director/producer. In his early career, from the late '20s to the early '40s, Montgomery was an amiable light comedian and dramatic actor, appearing in almost 40 sound films before 1935.

He starred opposite Norma Shearer in Private Lives (1931), Joan Crawford in The Last of Mrs. Cheyney (1937), Carole Lombard in Hitchcock's comedy Mr. and Mrs. Smith (1941) and was nominated for an Academy Award for Night Must Fall (1937) and Here Comes Mr. Jordan (1941). His career took a more serious turn after his stint in World War II. For his first film after returning, They Were Expendable (1945), Montgomery not only starred but assisted John Ford in the direction.

He also starred in and directed the Raymond Chandler detective thriller Lady in the Lake, noted for its unique first-person point of view. His attentions then turned to politics and television. Montgomery gave "friendly" testimony before the House Un-American Activities Committee (HUAC) and by the mid '50s was a consultant to Republican President Eisenhower.

As a prestigious television producer, he supervised the '50s dramatic anthology series Eye Witness (1953) and Robert Montgomery Presents (1950-57), which offered his daughter Elizabeth her acting debut and which won him an early Emmy Award in 1952.

Available Films:
Trivia:
Was widely considered to be one of the best dressed men in Hollywood and for years did not carry a wallet because it ruined the drape of his suits.

Before the US was drawn into World War II, Montgomery served in France as an ambulance driver for the American Field Services for six months. During the D-Day invasion he was one of the first to enter Cherbourg harbor and was awarded the Bronze Star for his service.

Shortly after Dwight D. Eisenhower was inaugurated in 1953, the new President asked Montgomery to become the White House's television consultant. Montgomery agreed and insisted on taking no pay.

When MGM studio chief Louis B. Mayer refused Montgomery a salary raise he deserved, the actor reportedly replied, "If you were a younger man, Mr. Mayer, I'd give you a beating.".

"If you are lucky enough to be a success, by all means enjoy the applause and the adulation of the public. But never, never believe it."

[Asked by reporters what it was like to work with Greta Garbo on Inspiration (1931)]: "Making a film with Garbo doesn't constitute an introduction."
Explore the simpler time of yesteryear...
A time when men and women were truly glamorous. A time when you could watch any movie with your children and not have to worry about gratuitous sex or violence – yet enjoy all the lustful inferences and edge-of-your-seat suspense.
Welcome to The Timeless Theater!
We're in the process of identifying which of our films are in the Public Domain, and offering these for sale on DVD.
​Please stay Tuned...!
Check out our new Film Noir Collection:
Coffee Mugs!
Phone Cases!
iPad Cases!
More coming soon!