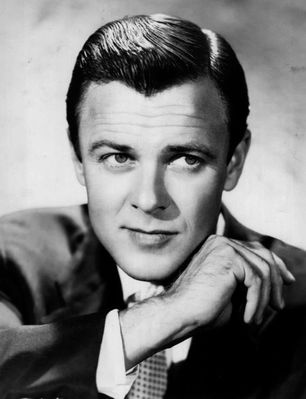 Born William Sterling Hart in 1917, the Pennsylvania-born actor was the son of a professional ballplayer. He graduated from the University of Pittsburgh, then worked as a clothing salesman before deciding to give acting a try. He certainly had the requisite dreamboat looks as Columbia signed this blue-eyed, black-haired, extraordinary-looking specimen in 1939. Billed as Robert Sterling as not to confuse anyone with the silent screen legend William S. Hart, he was groomed in two-reeled shorts and bit parts in minor features but nothing much happened.

In 1941, MGM took him on as a possible replacement for another gorgeous Robert - Robert Taylor - who was about to join the Navy. Sterling married actress Ann Sothern in 1943 after meeting her on the set of Ringside Maisie (1941), one of several programmers in Sothern's "Maisie" series. They had a daughter, Patricia, who later became the actress Tisha Sterling. While at MGM he appeared in slick, "nice guy" second leads in such "A" films as Greta Garbo's swan song Two-Faced Woman (1941), Johnny Eager (1941) and Somewhere I'll Find You (1942), the last two starring Lana Turner, while starring in "B" rankers that included The Getaway (1941) and This Time for Keeps (1942). Sterling himself would serve during WWII with the Army Air Force as a pilot instructor and was stationed at one point in London.

His movie persona suggested more than a trace of the dapper playboy, and his carefree style and tone easily had Gig Young coming to mind. Robert's film career, however, lost major momentum in post-war years with rather pat, colorless parts in such action dramas as Bunco Squad (1950) and Column South (1953), and even in the splashy musical Show Boat (1951). Divorced from Ms. Sothern in 1949, he was introduced to actress Anne Jeffreys while making his Broadway debut in "Gramercy Ghost" down the block from where she was starring in the musical "Kiss Me Kate." The couple wed in 1951 and produced three sons. Robert and Anne (who was also having a down time in films by this point) decided to revive their faltering careers with a singing club act. Not only was their pairing a success, it led directly to their starring roles in the classic Topper (1953) comedy series on TV.

As wry, debonair ghost George Kirby, he and Anne (playing his equally "spirited" wife Marion) expertly took over the jet-setting roles established on film by Cary Grant and Constance Bennett. The couple soon became household names engaging audiences week after week with their delightfully capricious antics and disappearing acts, much to the chagrin of bemused mortal Leo G. Carroll in the title role. Robert and Anne continued to perform together on stage ("Bells Are Ringing") and even top-lined another sitcom Love That Jill (1958) which lasted only a few months.

After another failed series Ichabod and Me (1961), which was a solo effort, and a couple of pedestrian parts in the movies Return to Peyton Place (1961) (as Dr. Michael Rossi) (1961), Voyage to the Bottom of the Sea (1961) and A Global Affair (1964), Robert slacked off considerably. He made only one return to Broadway with the 1961 light comedy "Roman Candle" co-starring Inger Stevens and Julia Meade. The show folded quickly. By the late 1960s, Sterling was pretty much out of the picture.

He entered into what would become a lucrative computer business, and kept a decidedly low profile, prompting many fans to think that the ever-busy Anne Jeffreys was a widow! In truth, the couple made sporadic appearances together in the 70s and 80s in episodes of "Murder, She Wrote" and "Hotel," among others. During the last decade of his life, Sterling suffered greatly from shingles, which kept him confined to a bed for the most part. The man who was once deemed "the ghost with the most" died in his Brentwood home of natural causes at the age of 88.
- IMDb Mini Biography By: Gary Brumburgh / gr-home@pacbell.net

Available Films:
Trivia:
Once considered for the title role in the classic Perry Mason (1957) series, which eventually went to Raymond Burr.

Shortly after arriving in Hollywood in 1938, he tested for the boxing lead in Golden Boy (1939), but lost out to William Holden. He ended up with an uncredited bit in the movie. He later played a boxer in the movie Ringside Maisie (1941) where he met first wife Ann Sothern.

Best remembered by the public for his co-starring role as "George Kerby" in the television series, Topper (1953).
Explore the simpler time of yesteryear...
A time when men and women were truly glamorous. A time when you could watch any movie with your children and not have to worry about gratuitous sex or violence – yet enjoy all the lustful inferences and edge-of-your-seat suspense.
Welcome to The Timeless Theater!
We're in the process of identifying which of our films are in the Public Domain, and offering these for sale on DVD.
​Please stay Tuned...!
Check out our new Film Noir Collection:
Coffee Mugs!
Phone Cases!
iPad Cases!
More coming soon!