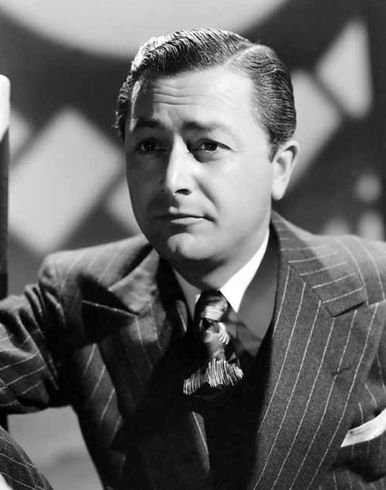 Chicago-born Robert Young carried his inbred "never give up" work ethic into his training at the Pasadena Playhouse. After a few movie-extra roles, he was signed by MGM to play a bit part as Helen Hayes' son in 1931's Sin of Madelon Claudet. At the request of MGM head Irving Thalberg, Young's role was expanded during shooting, thus the young actor was launched on the road to stardom (his first-released film was the Charlie Chan epic Black Camel [1931], which he made while on loan to Fox Studios).

Young appeared in as many as nine films per year in the 1930s, usually showing up in bon vivant roles. Alfred Hitchcock sensed a darker side to Young's ebullient nature, and accordingly cast the actor as a likeable American who turns out to be a cold-blooded spy in 1936's The Secret Agent. Some of Young's best film work was in the 1940s, with such roles as the facially disfigured war veteran in The Enchanted Cottage (1945) and the no-good philanderer in They Won't Believe Me (1947). In 1949, Young launched the radio sitcom Father Knows Best, starring as insurance salesman/paterfamilias Jim Anderson (it was his third weekly radio series). The series' title was originally ironic in that Anderson was perhaps one of the most stupidly stubborn of radio dads.

By the time Father Knows Best became a TV series in 1954, Young had refined his Jim Anderson characterization into the soul of sagacity. Young became a millionaire thanks to his part-ownership of Father Knows Best, which, despite a shaky beginning, ran successfully until 1960 (less popular was his 1961 TV dramedy Window on Main Street, which barely lasted a full season). His second successful series was Marcus Welby, M.D. (1968-1973). Young's later TV work has included one-shot revivals of Father Knows Best and Marcus Welby, and the well-received 1986 TV-movie Mercy or Murder, in which Young essayed the role of a real-life pensioner who killed his wife rather than allow her to endure a painful, lingering illness. Young passed away from respiratory failure at his Westlake Village, CA, home at the age of 91.

Available Films:
Trivia:
Had 4 daughters with Betty Henderson. He was 17 and she was 14 when they met in high school.

Suicide attempt due to alcoholism and depression. [1991]

Had a nervous breakdown in 1966 and it took him nearly 4 years to recover.

In later years, Robert and Elizabeth lived in a house in Westlake Village, California called "The Enchanted Cottage," named after the 1945 film in which he starred with Dorothy McGuire.

His patented shyness and painful insecurity turned his social drinking into a chronic alcohol problem during his MGM years that lasted nearly three decades. He recovered with the aid and encouragement of his wife Elizabeth and through spiritual metaphysics (Science of Mind), not to mention Alcoholics Anonymous. He often held AA meetings in his home.

Was a favorite co-star among Tinseltown's biggest female stars, including Margaret Sullavan, Joan Crawford, Janet Gaynor, Loretta Young, Norma Shearer Katharine Hepburn and Claudette Colbert, primarily because his acting was always reliable, complimentary and professional...plus the fact that he never tried to steal the spotlight.

Today, those who fondly recall him in the archetypal 1950s family sitcom Father Knows Best (1954) may be surprised to learn that when the series debuted in 1954, the show did so poorly in the ratings that CBS canceled it in March of 1955. A flood of protests came from viewers insisting that the show be reinstated. The show was moved to an earlier time, and it gradually became a hit.


Acting mentor and friends of Elinor Donahue and James Brolin.

"All those years at MGM I hid a black terror behind a cheerful face."

"I was an introvert in an extrovert profession."

"I really owe my first big opportunity to Irving Thalberg's technique of remaking pictures to his satisfaction. I was hired for a bit part as Helen Hayes' son in The Sin of Madelon Claudet (1931) and, after shooting was completed, Thalberg kept adding scenes and reshooting so that, by accident, my bit part became a significant role."

[on his favorite role: 'The Enchanted Cottage'] "The role symbolized my own life, though I wasn't a veteran who returned from war tragically disfigured. It demonstrated my theory that we are all, somehow, handicapped. Shyness and fear of people were my invisible scars. These were finally overcome, just as in the movie, because of the love of a woman who saw the 'perfect man' through all the imperfections."
Explore the simpler time of yesteryear...
A time when men and women were truly glamorous. A time when you could watch any movie with your children and not have to worry about gratuitous sex or violence – yet enjoy all the lustful inferences and edge-of-your-seat suspense.
Welcome to The Timeless Theater!
We're in the process of identifying which of our films are in the Public Domain, and offering these for sale on DVD.
​Please stay Tuned...!
Check out our new Film Noir Collection:
Coffee Mugs!
Phone Cases!
iPad Cases!
More coming soon!