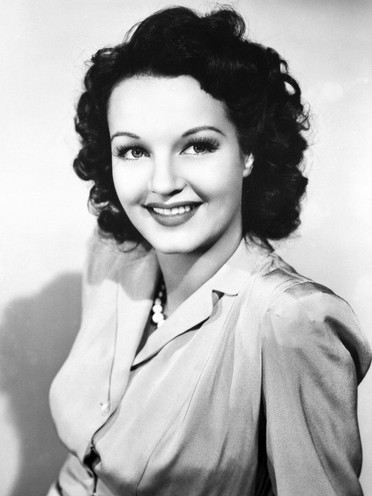 An ingenue of the 1930s, Rochelle Hudson insisted to interviewers that her career was due to a "friend of a friend of a friend" of her mother's, who happened to have connections with Fox film studios. Signed to a Fox contract in 1930, Hudson studied with the studio's voice coach, who farmed the girl out for singing work on radio and in cartoons; Hudson was briefly the voice of Honey in Warner Bros.' "Bosko" cartoons.

Her first on-camera appearance, on loanout to RKO, was in Fanny Foley Herself. Though often stuck in girl-next-door parts, Hudson was also effectively cast as tomboys and slatterns. She appeared in several Will Rogers pictures, mainly because Rogers liked sharing the spotlight with actors from his home state of Oklahoma. Her career dwindling into "B"-picture leads at Columbia and PRC, Hudson left Hollywood in 1942, spending the war years working in Naval Intelligence with her first husband, reserve officer (and former Disney story editor) Hal Thompson.

She returned to films in 1955 to play the mother of Natalie Wood in Rebel Without A Cause. Though her subsequent movie appearances were infrequent, she kept busy on television, co-starring on the 1954 sitcom That's My Boy and showing up on many an anthology series. Retiring from show business for good in 1967, Rochelle Hudson spent her last years as a successful real estate agent.

Trivia:
Abandoned Hollywood for a time after playing Natalie Wood's mother in Rebel Without a Cause (1955) to run a 10,000 acre ranch in Arizona. She later moved to Tulsa, Oklahoma and worked for a petroleum refinery. Missing California, she returned in 1963 and, briefly, restarted her career, but left Hollywood for good in 1967. She moved to Palm Desert where she found success in real estate.

Prior to the Pearl Harbor attack on December 7, 1941, in a minor way she assisted her husband Harold Thompson, who was doing espionage work in Mexico as a civilian. Together they posed as a vacationing couple to various parts of Mexico, to detect if there was any German activity in these areas. One of their more successful vacations uncovered a supply of high test aviation gas hidden by German agents in Baja.

Prodded by an ambitious stage mother into an early career, some sources state that Rochelle, who was quite mature for her age, was actually born in 1916. It seems that RKO Pictures, which had signed the teenager, added two years to her age because the public would never accept or condone a 15-year-old in romantic leads.
Explore the simpler time of yesteryear...
A time when men and women were truly glamorous. A time when you could watch any movie with your children and not have to worry about gratuitous sex or violence – yet enjoy all the lustful inferences and edge-of-your-seat suspense.
Welcome to The Timeless Theater!
We're in the process of identifying which of our films are in the Public Domain, and offering these for sale on DVD.
​Please stay Tuned...!
Check out our new Film Noir Collection:
Coffee Mugs!
Phone Cases!
iPad Cases!
More coming soon!