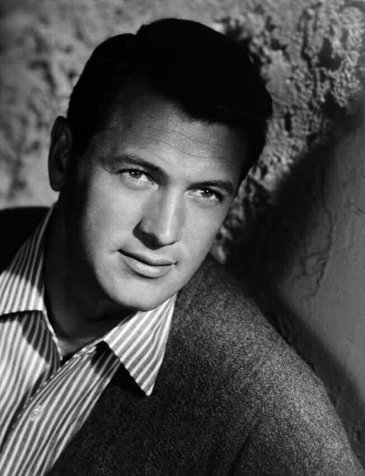 American actor Rock Hudson was born Roy Scherer, adopting the last name Fitzgerald when his mother remarried in the mid-'30s. A popular but academically unspectacular student at New Trier High School in Winnetka, IL, he decided at some point during his high school years to become an actor, although a wartime stint in the Navy put these plans on hold. Uninspiring postwar jobs as a moving man, postman, telephone company worker, and truck driver in his new home of California only fueled his desire to break into movies, which was accomplished after he had professional photos of himself taken and sent out to the various studios. A few dead-end interviews later, he took drama lessons; his teacher advised him to find a shorter name if he hoped to become a star, and, after rejecting Lance and Derek, he chose Rock ("Hudson" was inspired by the automobile of that name).

Signed by Universal-International, Hudson was immediately loaned to Warner Bros. for his first film, Fighter Squadron (1948); despite director Raoul Walsh's predictions of stardom for the young actor, Hudson did the usual contract player bits, supporting roles, and villain parts when he returned to Universal. A good part in Winchester '73 (1950) led to better assignments, and the studio chose to concentrate its publicity on Hudson's physical attributes rather than his acting ability, which may explain why the actor spent an inordinate amount of screen time with his shirt off. A favorite of teen-oriented fan magazines, Hudson ascended to stardom, his films gradually reaching the A-list category with such important releases as Magnificent Obsession (1954) and Battle Hymn (1957). Director George Stevens cast Hudson in one of his best roles, Bick Benedict, in the epic film Giant (1956), and critics finally decided that, since Hudson not only worked well with such dramatic league leaders as Elizabeth Taylor and James Dean -- but frequently outacted them in Giant -- he deserved better, less condescending reviews.

Hudson's career took a giant leap forward in 1959 when he was cast in Pillow Talk, the first of several profitable co-starring gigs with Doris Day. Once again taken for granted by the mid-'60s, Hudson turned in another first-rate performance as a middle-aged man given a newer, younger body in the mordant fantasy film Seconds (1966). A longtime television holdout, Hudson finally entered the weekly video race in 1971 with the popular detective series McMillan and Wife, co-starring Susan Saint James, and appeared on the prime time soap opera Dynasty in the early '80s. Regarded by his co-workers as a good sport, hard worker, and all-around nice guy, Hudson endured a troubled private life; though the studio flacks liked to emphasize his womanizing, Hudson was, in reality, a homosexual.

This had been hinted at for years by the Hollywood underground, but it was only in the early '80s that Hudson confirmed the rumors by announcing that he had contracted the deadly AIDS virus. Staunchly defended by friends, fans, and co-workers, Rock Hudson lived out the remainder of his life with dignity, withstanding the ravages of his illness, the intrusions of the tabloid press, and the less than tasteful snickerings of the judgmental and misinformed. It was a testament to his courage -- and a tragedy in light of his better film work -- that Hudson will be principally remembered as the first star of his magnitude to go public with details of his battle with AIDS. He died in 1985.

Available Films:
Trivia:
The Prudential Life Insurance Co. stopped using its slogan "Own A Piece Of The Rock" after Hudson died of AIDS and many jokes were made about him and the slogan.

Talent scout Henry Willson coined the stage name, "Rock Hudson", by combining the Rock of Gibraltar and the Hudson River.

Before taking his first film role, he got his teeth capped and was coached intensively in acting, singing, dancing, fencing and riding. Still, it took no less than 38 takes before he could successfully complete one line in his first picture, Fighter Squadron (1948).

The media first began to suspect he had serious health problems when he came to Carmel, California, in July 1985 to help his Pillow Talk (1959) co-star Doris Day launch her cable series, Doris Day's Best Friends (1985). His gaunt appearance and obvious disorientation suddenly became the focus of what was meant to be a joyous reunion of one of Hollywood's favorite on-screen couples. He died just three months later.

He actively sought the leading role in Ice Station Zebra (1968), and after Laurence Harvey backed out of the project, Hudson was cast.

He was very disappointed by the box office failure of Seconds (1966), which he considered to be his best performance and had hoped would show the public that he could be a versatile film actor.

"John Wayne was then the Hollywood legend, and I was on screen with him. The guy is an angel. He saved my life back then when no other film maker wanted to know me." - On The Undefeated (1969)

"I did a movie [The Undefeated (1969)] with Duke Wayne [John Wayne] and was very surprised to find out he had small feet, wore lifts, and a corset. Hollywood is seldom what it seems."

"I also remember meeting Gary Cooper at a party. I was so impressed that I blurted out that all the stars I had met before had been terrific people. Cooper thought about it for a minute, then said, "Yes, I suppose we are, the ones who are on top. But watch out for the ones who haven't quite made it, or are past it." It was valuable advice."

[on the scene in Pillow Talk (1959) in which he carries Doris Day through the streets of Manhattan] "I could have managed if only one take had been involved, but we went on endlessly, primarily because there was a bit actor who played a cop on the street, and as we passed him, Doris' line was 'Officer, arrest this man,' and the cop was supposed to say to me, 'How you doing, Brad?' but that stupid actor kept calling me Rock. So back to our marks we went for another take and another and another. I'll bet we did that scene twenty times. That's why we had the shelf for Doris to sit on." (Hudson ultimately had to carry Day on a shelf after numerous takes.)
Explore the simpler time of yesteryear...
A time when men and women were truly glamorous. A time when you could watch any movie with your children and not have to worry about gratuitous sex or violence – yet enjoy all the lustful inferences and edge-of-your-seat suspense.
Welcome to The Timeless Theater!
We're in the process of identifying which of our films are in the Public Domain, and offering these for sale on DVD.
​Please stay Tuned...!
Check out our new Film Noir Collection:
Coffee Mugs!
Phone Cases!
iPad Cases!
More coming soon!