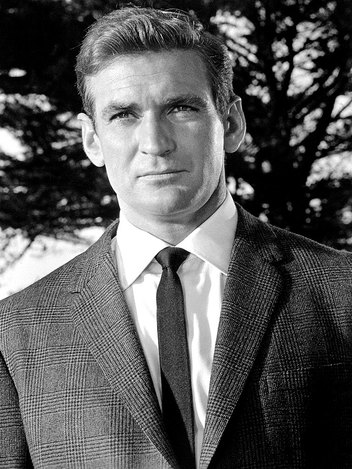 Suave and handsome Australian actor who came to Hollywood in the 1950s, and built himself up from a supporting actor into taking the lead in several well-remembered movies. Arguably his most fondly remembered role was that as George (Herbert George Wells), the inventor, in George Pal's spectacular The Time Machine (1960). As the movie finished with George, and his best friend Filby Alan Young seemingly parting forever, both actors were brought back together in 1993 to film a 30 minute epilogue to the original movie!

Taylor's virile, matinée idol looks also assisted him in scoring the lead of Mitch Brenner in Alfred Hitchcock's creepy thriller The Birds (1963), the role of Jane Fonda's love interest in Sunday in New York (1963), the title role in John Ford's biopic of Irish playwright Sean O'Casey in Young Cassidy (1965), and a co-starring role in The Train Robbers (1973) with John Wayne. Taylor also appeared as Bette Davis future son-in-law in the well-received film The Catered Affair (1956). He also gave a sterling performance as the German-American Nazi Major trying to fool James Garner in 36 Hours (1964).

Later Taylor made many westerns and action movies during the 1960s and 1970s; however, none of them were much better than "B pictures" and failed to push his star to the next level. Aditionally, Taylor was cast as the lead in several TV series including Bearcats! (1971), Masquerade (1983), and Outlaws (1986); however, none of them truly ignited viewer interest, and they were canceled after only one or two seasons. Most fans would agree that Rod Taylor's last great role was in the wonderful Australian film The Picture Show Man (1977), about a traveling side show bringing "moving pictures" to remote towns in the Australian outback.
- IMDb Mini Biography By: firehouse44

Available Films:
Trivia:
20th Century-Fox considered him for the astronaut role in 1968's Planet of the Apes (1968) but, perhaps seeking a bigger box office name, gave the part to Charlton Heston.

Taylor had completely retired from acting when Quentin Tarantino offered him the role of British Prime Minister Winston Churchill in Inglourious Basterds (2009). At first Taylor declined the part, suggesting that Tarantino should cast Albert Finney (who had played Churchill to great acclaim in The Gathering Storm (2002)), but eventually the director talked him into it.

Was originally considered for the role of Roper in Enter the Dragon (1973) but was thought to be too tall, compared to the actor he'd be sharing many action scenes with, Bruce Lee -- the part eventually played by John Saxon.

"Pretending to still be the tough man of action isn't dignified for me any more. There comes a time when you're over the hill and there are plenty of great looking younger actors who can take your place. The action stars of today are making some wonderful films. There are no 'I could do it better' feelings in me. The younger they come, the better they get. That's why Olympic records are broken." (from a 1987 interview)"

"I make love to as many women [as] will let me. If a girl gives me half a chance, I'll bed her down, and that's the truth."
Explore the simpler time of yesteryear...
A time when men and women were truly glamorous. A time when you could watch any movie with your children and not have to worry about gratuitous sex or violence – yet enjoy all the lustful inferences and edge-of-your-seat suspense.
Welcome to The Timeless Theater!
We're in the process of identifying which of our films are in the Public Domain, and offering these for sale on DVD.
​Please stay Tuned...!
Check out our new Film Noir Collection:
Coffee Mugs!
Phone Cases!
iPad Cases!
More coming soon!