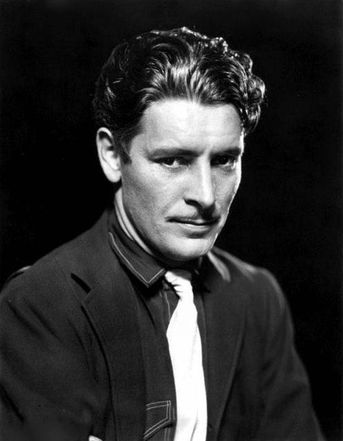 Born to middle-class British parents (his father was an import merchant), actor Ronald Colman was raised to be as much a gentleman as any "high born" Englishman, and strove to maintain that standard both on and off screen all his life. Acting was merely a hobby to Colman while he attended the Hadley School at Littlehampton, Sussex, but after a few years' drudgery as a bookkeeper with the British Steamship Company, the theatre seemed a more alluring (if not more lucrative) life's goal.

After a brief service in WWI (during which he was wounded and then discharged), Colman eventually went into acting full-time, making his debut in a tiny role in the play The Maharanee of Arakan (1916). A subsequent better role in a production of Damaged Goods led to Colman's being hired to star in a two-reel film drama, The Live Wire. The film was never released, which is why Colman's "official" debut is often listed as his first feature film The Toilers (1919). The money wasn't good in the British film industry of the period--in fact it was a step away from starvation wages - so Colman arrived in New York City with about $37 to his name, making his American movie debut in Handcuffs or Kisses? (1920). His next film was also his Big Break: The White Sister (1923), directed in Italy by Henry King, in which Colman was co-starred opposite prestigious actress Lillian Gish.

The association with King and Gish was Colman's entry into Hollywood, and by 1925 he'd begun his nine-year association with producer Sam Goldwyn. Most of Colman's silent films were lush romantic costume dramas, in which he usually co-starred with the lovely Vilma Banky. This sort of glorious nonsense was rendered anachronistic by the advent of talking pictures, but Goldwyn wisely cast Colman in a sophisticated up-to-date adventure, Bulldog Drummond (1929), for the actor's talkie debut. Colman scored an instant hit with his beautifully modulated voice and his roguishly elegant manner, and was one of the biggest and most popular screen personalities of the 1930s.

A falling out with Goldwyn in 1934 prompted Colman to avoid long-term contracts for the rest of his career. As good as his pre-1935 films were, Colman was even more effective as a free-lancer in such films as Tale of Two Cities (1935), Lost Horizon (1937), The Prisoner of Zenda (1937), The Light That Failed (1939) and Talk of the Town (1942). The actor also began a fruitful radio career during this period, first as host of an intellectual celebrity round-robin discussion weekly The Circle in 1939; ten years later, he and his actress wife Benita Hume starred in a witty and well-written sitcom about a college professor and his spouse, The Halls of Ivy, which became a TV series in 1954. Perhaps the most famous of Colman's radio appearance were those he made on The Jack Benny Program as Jack's long-suffering next door neighbor. Colman won an Academy Award for his atypical performance in A Double Life (1947) as an emotionally disturbed actor who becomes so wrapped up in his roles that he commits murder.

Curtailing his film activities in the 1950s, Colman planned to write his autobiography, but was prevented from doing so by ill health -- and in part by his reluctance to speak badly of anyone. Colman died shortly after completing his final film role as the Spirit of Man in The Story of Mankind (1957), a laughably wretched extravaganza from which Colman managed to emerge with his dignity and reputation intact.

Available Films:
Trivia:
His recording of "A Christmas Carol", originally released in a Decca 78-RPM set in 1941, was the first recorded version to win wide acclaim. It appeared several times on LP, and has recently (October 2005) been released on CD by Deutsche Grammophon, along with its frequent companion piece on LP, "Mr. Pickwick's Christmas".

In his early film career he was panned by many critics for his overtheatrics (used in the stage work he was doing at the time) and his pronounced limp (from a bad war injury). He credited working with greats such as George Arliss for overcoming those obstacles.

He, along with wife Benita Hume, was a frequent guest on Jack Benny's radio show. The Colmans were supposed to be next-door neighbors. After Colman won his Oscar, Jack borrowed it to take home only to be robbed and the Oscar taken. For several weeks the show's story line was the recovery of the stolen Oscar.

"Fame has robbed me of my freedom and shut me up in prison, and because the prison walls are gilded, and the key that locks me in is gold, does not make it any more tolerable."

"Why should I go to dull parties and say dull things just because I wear greasepaint and make love to beautiful women on the screen?"

"A man usually falls in love with a woman who asks the kind of questions he is able to answer."