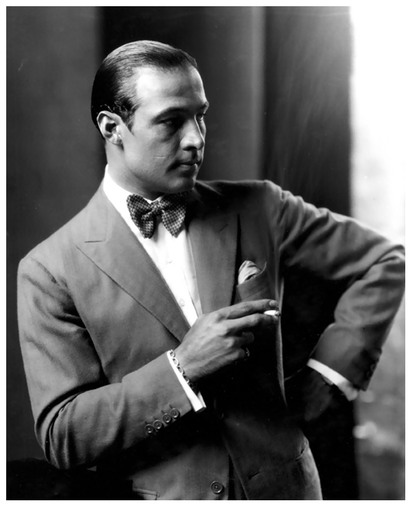 Though the phrase "Latin Lover" has been applied to many actors over the years, to some film buffs the designation truly fits only one individual: Rudolph Valentino. The son of an Italian army veterinarian, Valentino attended the Royal School of Agriculture in Genoa after his career at a prestigious military academy came a-cropper. At age 17 he moved to Paris and the following year he emigrated to New York, supporting himself as a landscape gardener, dishwasher, and tango dancer, among other occupations. Unfortunately he also occasionally ran afoul of the law when he turned to petty crimes to make ends meet. Through the kindness of his actress friend Alla Nazimova, he was hired to dance in a musical which died aborning in Utah but paid his way to the West Coast. Another friend, actor Norman Kerry, helped Valentino land a few minor roles in films and by 1919 the young Italian was typecast as a shifty-eyed Latino villain. During this period he married another aspiring film performer, Jean Acker, but the union didn't last long. Finally in 1921, Valentino's star potential was realized by screenwriter June Mathis, who convinced director Rex Ingram to cast the actor in the important role of Julio in Metro's The Four Horseman of the Apocalypse.

Valentino's unique brand of sexual charisma scored an immediate hit with the public, but Metro failed to capitalize on their new personality, prompting him to accept a better offer at Paramount. Here he co-starred with Agnes Ayres in The Sheik (1922), a tatty, unsophisticated adaptation of E.M. Hull's exotic novel. Despite the film's shortcomings, Valentino's magnetic personality permeated every frame, firmly establishing him as a star of the first rank.

As was its custom, Paramount rushed their new sensation from one film to another and before long the law of diminishing returns exercised its usual prerogative. So dissatisfied was Valentino with his substandard vehicles that he took a two-year sabbatical from films, devoting his time to writing and publishing poetry. When he returned to the screen, it was under the heavy-handed influence of his second wife, set designer Natacha Rambova (born Winifred Hudnut), who talked him into playing epicene dandies in such overblown productions as Monsieur Beaucaire (1924) and Cobra (1925).

The Rambova-inspired effeminization of Valentino's screen personality provoked outrage from "100 percent red-blooded" males, one of whom, a columnist for the Chicago Tribune, characterized the actor as a "pink powder puff" and cast libelous aspersions upon his manhood. Valentino angrily responded by challenging the writer to a fistfight, but the waspish scrivener refused to give him the satisfaction. Many of Valentino's friends and associates rushed to his defense during this period, affirming that he was not the "painted pansy" he was accused of being, adding for good measure that he was a loyal, considerate, and trustworthy friend.

Even the acerbic essayist H.L. Mencken stated in print that Valentino was not only a certified he-man but an all-around nice fellow. Hoping to alter the public's perception of him, he purged the troublesome Rambova from his life and formed his own production company, playing virile leading roles in The Eagle (1925) and Son of the Sheik (1926), two of his best films. Though he was able to salvage his career, he was unable to enjoy the fruits of his labors: a few months after completing Son of the Sheik, he was hospitalized in New York with a perforated ulcer. Complications quickly set in, and on August 23, 1926, the 31-year-old actor died of peritonitis and septic endocarditis.

Almost immediately, the Valentino "death cult" entrenched itself: nearly 80,000 hysterical women (including his most recent lover, actress Pola Negri) crowded into Campbell's Funeral Parlor in New York to catch a glimpse of his body, while in other parts of the world several of the actor's more impressionable devotees committed suicide (as if anticipating the similar mass hysteria surrounding the death of Elvis Presley in 1977, rumors persisted well into the 1930s that Valentino had not died at all, but had gone into hiding under an assumed name). In addition to the dozens of biographical books on Valentino, there have been several filmed treatments of his life, starring actors as diverse as Anthony Dexter and Rudolph Nureyev. None of these worthies could approach the special appeal of the real Rudolph Valentino, whose best films still retain their magic even after eight decades.

Available Films:
Trivia:
Considered to be the first male sex symbol of the cinema during the silent era.

For many years on the anniversary of Valentino's death, a mysterious woman, dressed all in black, was seen laying a wreath of flowers on his grave. Her identity was never established.

Valentino and Jean Acker had one of the shortest celebrity marriages on record: six hours. After courting for just a few days, they impulsively married on November 5, 1919, but she locked him out of their hotel room later that night after a spat. They separated, and their divorce was finalized in 1922. Ironically, after their divorce, they became good friends.

A few months before Valentino's death, a Chicago newspaper columnist attacked his masculinity in print, referring to him as a "pink powder puff". A lawsuit was pending when Valentino was fatally stricken. One of his last questions to his doctor was, "Well, doctor, and do I now act like a 'pink powder puff'?" His doctor reportedly replied, "No, sir. You have been very brave. Braver than most.".

"To generalize on women is dangerous. To specialize in them is infinitely worse."

"Women are not in love with me but with the picture of me on the screen. I am merely the canvas upon which the women paint their dreams."

"A man should control his life. Mine is controlling me."

[after his divorce from Jean Acker] "She said she was my soul mate, but she proved to be my check-mate!"
Explore the simpler time of yesteryear...
A time when men and women were truly glamorous. A time when you could watch any movie with your children and not have to worry about gratuitous sex or violence – yet enjoy all the lustful inferences and edge-of-your-seat suspense.
Welcome to The Timeless Theater!
We're in the process of identifying which of our films are in the Public Domain, and offering these for sale on DVD.
​Please stay Tuned...!
Check out our new Film Noir Collection:
Coffee Mugs!
Phone Cases!
iPad Cases!
More coming soon!