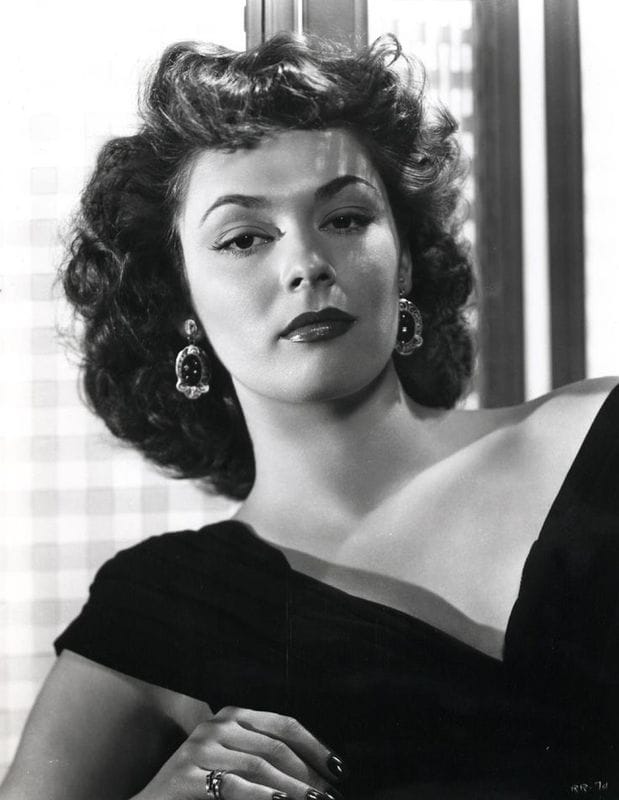 Ruth Roman was born in Lynn, Massachusetts, the youngest of three daughters of Lithuanian-Jewish parents, Mary Pauline (Gold) and Abraham Roman. Her father, a carnival barker, died when she was a small child, forcing her mother to support the family by working as a waitress and cleaning woman.

Ruth grew up in the poor tenement district of Boston, Massachusetts, where she went to school. However, she left school after just two years to pursue an acting career. Her chosen path proved to be strewn with obstacles: in New York, she obtained a job posing for stills for a crime magazine, but theatrical work eluded her. She then worked as a hat check girl at a night club before calling it quits and returning to Boston. There, she made ends meet as an usherette during the day while at night performing with the New England Repertory Company, her first steady acting job. She also studied drama and eventually graduated from the Bishop-Lee Theatre School.

Trying to get into films, Ruth unsuccessfully made the rounds of agents and producers for two years (1940-42), until a bit part as a WAVE came her way in the film Stage Door Canteen (1943). With $200 to her name, she purchased a one-way ticket to Hollywood, where she found shared accommodation with other aspiring starlets - naming it, optimistically, 'the House of the Seven Garbos'. After a screen test with Warner Brothers failed to result in a contract, Ruth had another run of six hard years playing bit parts, many of them uncredited, some ending up on the cutting room floor. A sole speaking part of consequence was in the titular role of Jungle Queen (1945), a Universal serial (after subsequent acting lessons, Ruth was aghast, when the serial was re-released in 1951).

Ruth finally got her big break when producer Dore Schary cast her (against character, as a murderess) in the RKO thriller The Window (1949). That same year, she successfully auditioned for Stanley Kramer's boxing drama Champion (1949) as the dependable wife of the fighter (Kirk Douglas). After this turning point in her life, the shapely, smoky-voiced brunette secured a contract with Warner Brothers. During the next phase of her career, she moved effortlessly from glamorous and seductive to demure and wholesome, in films opposite stars like James Stewart, Errol Flynn and Gary Cooper. Look Magazine billed her as the 'Big Time Movie Personality of 1950', and by the following year she was receiving some 500 fan letters per week.

While many of her leads were in westerns (albeit mostly A-grade ones), Ruth was somewhat more memorable in support of Farley Granger (as his upper-crust lover and the raison d'etre for the planned murder of his wife) in Alfred Hitchcock's Strangers on a Train (1951). Another off-beat role was as a gangster's moll in the British-made updated Shakespearean adaptation Joe MacBeth (1955). As Lily, she is the power behind angst-ridden Paul Douglas ('Joe'), whom she easily manipulates to do her bidding. In The Bottom of the Bottle (1956), she was at her dependable best as the supportive wife of alcoholic Van Johnson. Arguably, her last noteworthy performance on the big screen was in Alexander Singer's romance/drama Love Has Many Faces (1965).

By the 1960s, Ruth had made the transition to middle-aged character parts and began to appear mostly on television, in shows like The Outer Limits (1963), Mannix (1967), Gunsmoke (1955), and (in a recurring role) in The Long, Hot Summer (1965). She also toured nationally with theatrical productions of "Plaza Suite", "Who's Afraid of Virginia Woolf" and "Two for the Seesaw".

For the actress, who was said to disdain the trimmings of Hollywood stardom, real-life drama came when she and her son counted among the 760 survivors of the sinking of the luxury cruise liner 'Andrea Doria' in 1956. In September 1967, she jumped from her burning car, but still managed to make her scheduled performance in "Beekman Place" at the Ivanhoe Theatre. Ruth died in September 1999 at her home in Laguna Beach, aged 75.
- IMDb Mini Biography By: I.S.Mowis

Available Films:
Trivia:
She, her son Richard "Dickie" Hall, and Betsy Drake were first-class passengers aboard the Andrea Doria when the ship collided with the Stockholm and sank in 1956. They were among almost 1,700 saved in the sinking. Roman and her son were separated during the rescue. She arrived in New York first and waited for him, surrounded by news photographers and reporters. She was on the pier to greet him when the rescue ship arrived in New York the next day.

During the late 1940s, Roman lived with Linda Christian and five other aspiring actresses in a residence they called "The House of Seven Garbos".
Explore the simpler time of yesteryear...
A time when men and women were truly glamorous. A time when you could watch any movie with your children and not have to worry about gratuitous sex or violence – yet enjoy all the lustful inferences and edge-of-your-seat suspense.
Welcome to The Timeless Theater!
We're in the process of identifying which of our films are in the Public Domain, and offering these for sale on DVD.
​Please stay Tuned...!
Check out our new Film Noir Collection:
Coffee Mugs!
Phone Cases!
iPad Cases!
More coming soon!