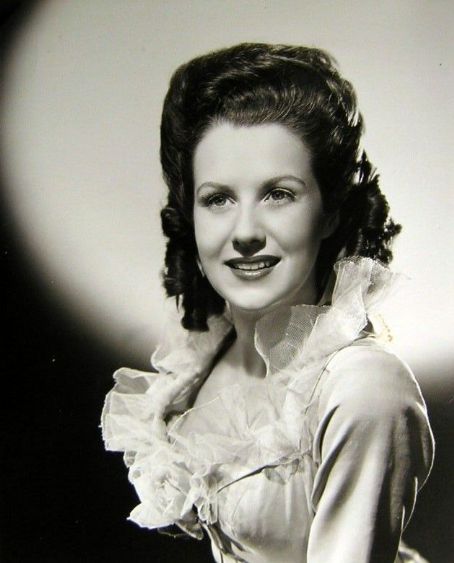 Reedy and regal actress Ruth Warrick will be remembered for two names and two names alone. In films, she will indelibly be referred to as the castoff first "Mrs. Citizen Kane," and on TV she will forever be synonymous with her character of Phoebe Tyler Wallingford, the obnoxiously wealthy, viper-tongued, manipulative and meddlesome Pine Valley grande dame who held court for 35 years until her death in 2005.

Born in St. Joseph, Missouri in 1915, Ruth moved to Kansas City while in high school and later studied at the University of Kansas City. An essay contest winner, a resulting promotional tour brought her to New York where her interest in acting was increasingly piqued. Stage-trained in New York, she appeared in such plays as "Bury the Dead" (1933) and was a radio singer at one point. She met her first husband during one her many broadcasts. This in turn led her to Orson Welles and his Mercury Theater, and the rest is history. In 1941 Welles escorted her and his company of members to Hollywood...and major stardom.

Exclusively chosen by Welles to make her ladylike debut as Emily Norton Kane in what most consider the greatest American film of all time, she followed Citizen Kane (1941) with nearly two dozen films, most of which were "B" melodramas and rugged adventures. She could play the altruistic wife with stoic ease but enjoyed more enthusiastic notices when controlling, tightly-wound or neurotic.
Appearing with some of Hollywood's most illustrious male and female stars, she played a countess opposite Douglas Fairbanks Jr. in The Corsican Brothers (1941); co-starred with Mercury Theater compatriots Joseph Cotten, Agnes Moorehead and Everett Sloane in the classic film noir Journey Into Fear (1942); and starred in several war-themed movies including Secret Command (1944) with Chester Morris, Mr. Winkle Goes to War (1944) with Edward G. Robinson, and China Sky (1945), with 'Randolph Scott' (I). Post-war credits tended to regress her to second lead status opposite the likes of Joan Crawford and Ingrid Bergman, yet she still managed a few top femme roles in such films as Driftwood (1947) and One Too Many (1950), the latter in which she played an alcoholic.

The focus of Ruth's career switched to the "Golden Age" of TV in the 1950s. Aside from her many live dramatic showcases, she made a lasting mark in daytime soap opera. Her tight-lipped matrons on Guiding Light (1952) and As the World Turns (1956) were only a warm-up for her once-in-a-lifetime portrayal of one of daytime's most dominant, colorful and enduring characters. Cast on All My Children (1970) from the show's inception, Phoebe Tyler became a clear and instant favorite -- the lady you relished hating.

Her priggish socialite character carried strong story lines for nearly two decades until advancing age and failing health restricted her time. Her well-received (and aptly titled) autobiography "The Confessions of Phoebe Tyler" (1980) chronicled the lives of both her and her alter-ego. Prime time also made use of Ruth's sudsy-styled talent as her Emmy nomination for the role of Hannah Cord in Peyton Place (1964) will attest.

Making her Broadway debut with "Miss Lonelyhearts" in 1957, Ruth's talents also included singing and, in between on-screen assignments, enjoyed the musical stage now and then. She understudied in "Take Me Along" (1959) with Jackie Gleason and in 1973 enjoyed a successful return to Broadway with the revival of "Irene" starring Debbie Reynolds. In regional and summer theater she starred in "Dial M for Murder," "Who's Afraid of Virginia Woolf?" and "Long Day's Journey Into Night," among others. She also toured as Anna in "The King and I" and appeared in the musicals "Pal Joey" and "Roberta."

Her life, however, was not dedicated to just on-camera pursuits. On the contrary, long active in arts-in-education programs, including programs for the disadvantaged, Ruth received the first national Arts in Education Award in 1983 from the Board of Directors of Business and Industry for Arts in Education, Inc. The award was subsequently named the Ruth Warrick Award for Arts in Education and continued to be given annually. In 1991, she received her certification as a licensed metaphysical teacher. In her senior years, she became an avid spokesperson for the rights of senior citizens as well as the disabled, and was appointed to the U.N. World Women's Committee on Mental Health.

In frail health in later years, the still feisty, five times married-and-divorced actress made occasional appearances on her beloved daytime show, even while confined to a wheelchair after a serious fall in 2001. She made her final appearance on the show in early January, 2005 to commemorate its 35th anniversary, and passed away shortly after at age 89 of complications from pneumonia.
- IMDb Mini Biography By: Gary Brumburgh / gr-home@pacbell.net

Available Films:
Trivia:
Fell and broke her hip in early 2001 while vacationing in Italy. The fall was incorporated into the All My Children (1970) script, and she continued to play her Phoebe Tyler Wallingford character on a limited basis from a wheelchair.

In 1937, she won a contest to serve as Kansas City's paid ambassador and ended up in New York presenting a live turkey to Mayor Fiorello La Guardia at City Hall. She decided to stay in the big city and found work on radio and with the Mercury Theatre troupe headed by Orson Welles.

Appeared in the Broadway musicals "Take Me Along" with Jackie Gleason in 1959, and "Irene" with Debbie Reynolds in 1973.

Her favorite musical was The King and I (1956), from which came her favorite song, "Getting to Know You."

She was an enormous fan of The Beatles.

In the 1980s, she admitted to have had a "torrid romance" with Anthony Quinn while making the film China Sky (1945).

Ruth Warrick died on January 15, 2005. After Warrick's death, the day after the 2005 Academy Award ceremony, ex-All My Children (1970) co-star, Kelly Ripa, expressed her outrage on Live! with Kelly (1988), that Warrick had not been included in this annual memorial tribute.

Before she was a successful actress, she once wrote a song for Greta Garbo.

Met Orson Welles when she was doing CBS Radio, in 1938.

Had a photographic memory.

Was pregnant while doing Citizen Kane (1941).

According to her ex-All My Children (1970) co-star, Susan Lucci, she said in an interview Warrick would frequently finish a day's work, fly to a charity event and then be back on the set the next day.

""It is as if the imaginary girl who was Kane's wife had grown into the woman who influences so many lives in the imaginary world of Pine Valley. Since Emily's character owes much to the compelling hand of Orson Welles, so indirectly, must Phoebe's." - referring to her two most famous character roles as Emily Kane in Citizen Kane (1941) and Phoebe Tyler in All My Children (1970)."
Explore the simpler time of yesteryear...
A time when men and women were truly glamorous. A time when you could watch any movie with your children and not have to worry about gratuitous sex or violence – yet enjoy all the lustful inferences and edge-of-your-seat suspense.
Welcome to The Timeless Theater!
We're in the process of identifying which of our films are in the Public Domain, and offering these for sale on DVD.
​Please stay Tuned...!
Check out our new Film Noir Collection:
Coffee Mugs!
Phone Cases!
iPad Cases!
More coming soon!