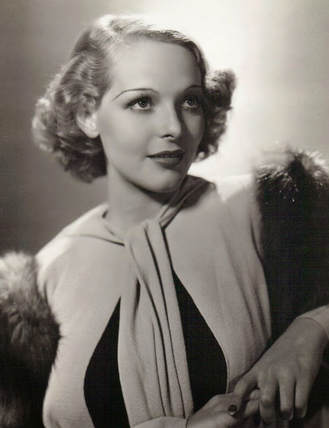 Throughout her career, American actress Sally Blane would be noted less for her acting achievements than for the fact that she was the older sister of film star Loretta Young. It couldn't be helped; not only did Sally look just like Loretta (albeit with lighter hair), she tended to play the same type of roles.

Blane was one of four children born to a Salt Lake City railroad auditor and his wife. Her real name was Elizabeth Jane Young: she had two sisters, Polly Ann and Loretta, and a brother named John Royal (her youngest sister Georgiana was born in 1920, after her mother had remarried). When her parents separated, Elizabeth Jane's mother took the children to live with her married sister in Hollywood. The four Young children were quite photogenic, and had no trouble securing $3.50 per day extra work in the movies.

After convent school, Elizabeth Jane resumed her film work under the studio-imposed name of Sally Blane; she appeared as leading lady in The Collegians, a series of youth-oriented two reel comedies. In 1929, Sally and sister Loretta were among the "Wampas Baby Stars," a group of promising young actresses promoted for publicity purposes by the Western Association of Motion Pictures Advertisers. Loretta was dedicated to becoming a full-fledged star, but Sally lost interest in pursuing fame early on, settling instead for the life of a freelance working actress. Occasionally she'd attain the lead in an upper-echelon picture like Advice for the Lovelorn (1933) or The Silver Streak (1934), but for the most part she was content to appear in less demanding low-budget westerns and crime melodramas.

In 1935, Blane married actor/director Norman Foster and virtually retired to raise a family. In 1939, Loretta Young insisted that all her sisters appear as her fictional sisters in The Story of Alexander Graham Bell; thus, for the only time in her adult career, Sally costarred with Loretta, Polly Ann and Georgianna Young (it would be Georgianna's only movie appearance; expressing no interest at all in performing, she married actor Ricardo Montalban and settled for the "career" of Hollywood wife). After Bell, Sally Blane concluded her starring career, though her husband was occasionally able to coax her back before the cameras in small supporting roles.

One of her biggest Hollywood disappointments was losing the role of Paul Muni's fiancée Helen in I Am a Fugitive from a Chain Gang (1932) which was played by Helen Vinson.

"There were two things against me. I was never resilient enough. I've always felt rejection deeply and took it personally. Then, too, I wasn't as slim as [sister Loretta Young]."


"[about sister Loretta Young] She had more drive than the rest of us. Loretta was always really ambitious. She would turn down parts that I would have given anything to have played, but she never realized how much I wanted them. But while Loretta was concentrating on her career, I had all the beaus."