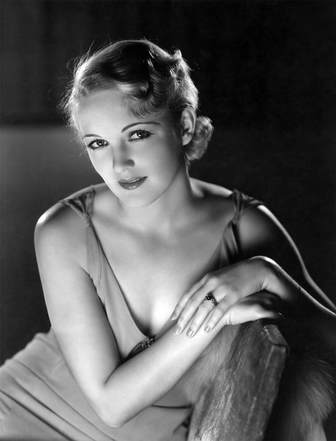 Versatile blond leading lady Sally Eilers studied to be a dancer before heading to Hollywood in her teens. She joined the Mack Sennett troupe in the mid-1920s, graduating from bathing beauty roles to the lead in Sennett's 1928 feature The Good-Bye Kiss; that same year, she was selected as one of the WAMPAS "baby stars."

One of the busiest actresses in the early-talkie era, Sally appeared opposite James Dunn in a series of popular Fox vehicles, including Bad Girl (1931), Sailor's Luck (1932) and Arizona to Broadway (1933). She was married to Hoot Gibson in 1930, but the union fell apart as her star soared and his diminished. While never a major star, Eilers retained her popularity into the late 1930s, tackling such tricky roles as the Aimee Semple McPherson-ish heroine in 1938's Tarnished Angels.

She eased into character roles in the 1940s, the most intriguing of which was her characterization of James Lydon's mother in the 1945 Hamlet derivation Strange Illusion. Sally Eilers retired from moviemaking in 1951 after completing her work on Stage to Tucson.

Alas, most of her subsequent parts were in lesser features and she never made the grade as a top star. Sally continued to act in films, eventually reduced to supporting roles, until the late 1940s. She was married four times.