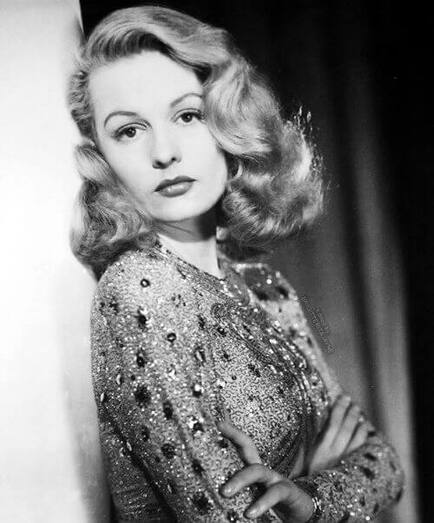 Lovely, statuesque actress Sally Gray, complete with husky voice and dumb blonde persona was born Constance Vera Stevens in London, England on February 14, 1915. In a career instigated by her ballerina mother, Sally began performing at age 10 in minstrel shows and was initially trained in dance and acting at the Fay Compton Studio of Dramatic Art.

She later gained experience as a chorine in London-based musical shows before making her film debut in an adaptation of Richard B. Sheridan's classic restoration comedy School for Scandal (1930). Throughout the late 1930s the shapely, vivacious actress appeared in such films as Loves of a Dictator (1935), Checkmate (1935), Danger in Paris (1937), and The Saint in London (1939). She was also utilized by actor/director Stanley Lupino in such light "B"-level entertainment as Cheer Up (1936), Hold My Hand (1938) and Over She Goes (1937).

Following the filming of The Saint's Vacation (1941) and Suicide Squadron (1941), Sally suffered a major nervous breakdown and was off the screen for five years. She bounced back in the post-war years with "bad girl" roles in heavier dramas such as Green for Danger (1947), I Became a Criminal (1947) and The Mark of Cain (1947), the last film playing a wife who comes between her husband and his brother.

Hollywood expressed interest in the voluptuous blonde after her work in The Hidden Room (1949), but she turned down the offer when she married Dominick Geoffrey Edward Browne who, as the fourth Lord Oranmore and Browne, made her his third wife in 1950. Her last film was I'll Get You (1952). Sally settled into her new life as Lady Oranmore and Browne in County Mayo, Ireland, but returned to live in London in the early 1960s. Never reactivating her career, she tended assiduously to her gardening in later years.

Sally's stepson, Tara Browne, from her husband's second marriage, was a friend of John Lennon's. Tara drove his Lotus Elan into a lamp-post in Redcliffe Square, London, in 1966, and became a subject in the Beatles' song "A Day in the Life," which contained the memorable verse: "He blew his mind out in a car; he didn't notice that the lights had changed; a crowd of people stood and stared; they'd seen his face before; nobody was really sure if he was from the House of Lords...".
Explore the simpler time of yesteryear...
A time when men and women were truly glamorous. A time when you could watch any movie with your children and not have to worry about gratuitous sex or violence – yet enjoy all the lustful inferences and edge-of-your-seat suspense.
Welcome to The Timeless Theater!
We're in the process of identifying which of our films are in the Public Domain, and offering these for sale on DVD.
​Please stay Tuned...!
Check out our new Film Noir Collection:
Coffee Mugs!
Phone Cases!
iPad Cases!
More coming soon!