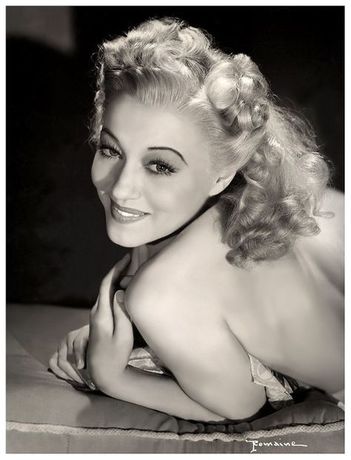 She's considered an American icon in the world of entertainment although most contemporaries have no idea who she is until her legendary risqué "fan dance" is brought up. Then they put two and two together. Burlesque star Sally Rand was born in the Ozark region (Missouri) in 1904, her father a corporal in the Spanish-American War and her mother a Pennsylvania Dutch Quaker.

Inspired by the legendary ballerina Anna Pavlova, Sally became interested in dance at a young age and left home to join a carnival as a teen. She invariably became a cigarette girl, chorine, café dancer, artist's model and circus performer (Ringling) through a series of introductions. She subsequently joined a repertory theater company and took acting seriously for the first time.

During the 20s she appeared in a number of stage shows. Films came her way as she was able to score work (due to her agile background in the circus) from Mack Sennett and Hal Roach in a few of their daredevil slapstick shorts. A Wampas Baby Star of 1927, she joined mentor Cecil B. DeMille's stock company and entered feature films with a new name that DeMille gave her -"Sally Rand."

She decorated a number of silents, including westerns with Hoot Gibson and others, but a pronounced lisp hurt her career come the advent of sound. It was at this juncture that the shapely dame decided to work on incorporating her talent for dancing back into her career. With the right mixture of enticement, imagination and intricate feathery placement, Sally Rand came upon her secret formula to success. As an exotic burlesque performer, she not only winningly ignited male libidos but found a steady gig for the rest of her days.
A long-standing job at the Paramount Club in 1932 is where the idea of her "fan dance" was created. Her "Lady Godiva" stunt at the Chicago's World's Fair had her arrested on lewd charges but she was eventually released. All the brouhaha just increased her notoriety. She later created the "bubble dance" in which she did a taunting dance with a huge five foot specially constructed translucent bubble to the delight of male audiences.

In the 1930s she also appeared in legit plays including a stint as Sadie Thompson in "Rain" in 1935 opposite Humphrey Bogart. She would appear in later years at various revues, expositions and fairs still teasing and playing "hide and peek" with the guys, her act seldom straying from its original concept.

She was arrested a few more times than she was married (at least three husbands can be credited to her marriage account). She continued to appear on stage doing her fan dance past age 60 and once replaced an ailing burlesque star Ann Corio in the stage show "This Was Burlesque" in the 1960s. She also shared the stage with burlesque topliners Tempest Storm and Blaze Starr. Sally's final appearance took place in Kansas City in 1978 and she died the following year.

The dictionary defines "exotic" as that which is strange and foreign. I am not strange; I like boys. I am not foreign; I was born and raised in Hickory County, Missouri.

I'm not the type to sit on a porch and watch life go by.
I have been successful, and I am grateful for my success. I have had some experiences that I wish I never had had, but that would be true in any business. I cannot say sincerely that I would have chosen just this road to fortune. Perhaps I might have wished for another way. But I took the opportunity that came to me. Certainly I am an opportunist. I admit it.

I haven't been out of work since the day I took my pants off.
​
Explore the simpler time of yesteryear...
A time when men and women were truly glamorous. A time when you could watch any movie with your children and not have to worry about gratuitous sex or violence – yet enjoy all the lustful inferences and edge-of-your-seat suspense.
Welcome to The Timeless Theater!
We're in the process of identifying which of our films are in the Public Domain, and offering these for sale on DVD.
​Please stay Tuned...!
Check out our new Film Noir Collection:
Coffee Mugs!
Phone Cases!
iPad Cases!
More coming soon!