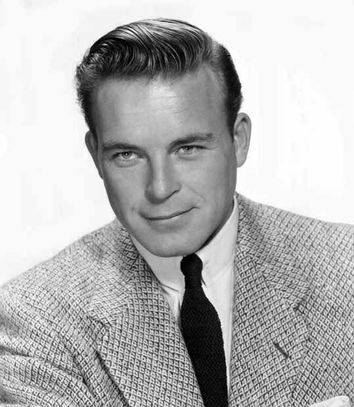 He had the manly good looks and rugged appeal to make it to top stardom in Hollywood and succeeded quite well as a sturdy leading man of standard action on film and TV. Born in Brooklyn on September 13, 1924, Irish-American Scott Brady was christened Gerard Kenneth Tierney (called Jerry) by parents Lawrence and Maria Tierney. His father, chief of New York's aqueduct police force, had always had show business intentions and later did print work after retiring from the force. Both Scott's older and younger brothers, Lawrence Tierney and Edward Tierney went on to become actors as well. Lawrence's promising film noir "bad guy" career was sabotaged by a severe drinking disorder that led to numerous skirmishes with the law. Scott himself faced a narcotics charge in 1957 (charges were dropped, Scott maintained that he was framed) and later (1963) was involved in illegal bookmaking activities. Fortunately, Scott was more cool-headed and wound up avoiding the pitfalls that befell his older brother, making a very lucrative living for himself in Hollywood throughout the 1950s and early 1960s.

Scott grew up in Westchester County and attended Roosevelt and St. Michael's High Schools. Like his older brother Lawrence, Scott he was an all-round athlete in school and earned letters for basketball, football and track and expressed early designs on becoming a football coach or radio announcer. Instead he enlisted before graduating from high school and served as a naval aviation mechanic overseas. During his term of duty he earned a light heavyweight boxing medal. He was discharged in 1946 and decided to head for Los Angeles where his older brother Lawrence was making encouraging strides as an actor. Toiling in menial jobs as a cabbie and day-time laborer, the handsome, blue-eyed looker was noticed having lunch in a café by producer Hal B. Wallis and offered a screen test. The test did not fare well but, not giving up, he enrolled in the Bliss-Hayden drama school under his G.I. Bill, studied acting, and managed to rid himself of his thick Brooklyn accent.

He signed with a minor league studio, Eagle-Lion, and made his debut of sorts in the poverty-row programmer In This Corner (1948) utilizing his boxing skills from his early days in the service. He showed more promise with his second and third films Canon City (1948) and He Walked by Night (1948), the latter as a detective who aids in nabbing psychotic killer Richard Basehart. Scott switched over to higher-grade action stories for Fox and Universal over time.

Westerns and crime stories would be his bread-winning genres with The Gal Who Took the West (1949) opposite Yvonne De Carlo and John Russell and Undertow (1949), with Russell again, being prime examples. He frequently switched from hero to heavy during his peak years. In one film he would romance a Jeanne Crain in The Model and the Marriage Broker (1951) or a Mitzi Gaynor in Bloodhounds of Broadway (1952), while in the next beat Shelley Winters to a pulp in Untamed Frontier (1952). A favorite pin-up hunk in his early years, he hit minor cult status as a bad hombre, The Dancin' Kid, in the offbeat western Johnny Guitar (1954). He and the other manly men, however, were somewhat overshadowed in the movie by the Freudian-tinged gunplay between Joan Crawford and Mercedes McCambridge. Other roles had him sturdily handling the action scenes while giving the glance over to such diverting female costars as Barbara Stanwyck, Mala Powers and Anne Bancroft.

Scott would mark the same territory in TV -- westerns and crimers -- finding steadier work on the smaller screen into the 1960s. He starred as the title hero in the western series Shotgun Slade (1959). Stage too was a sporadic source of income with such productions as "The Moon Is Blue", "Detective Story" and "Picnic" under his belt before making his Broadway bow as a slick card sharpie opposite Andy Griffith in the short-lived musical "Destry Rides Again" in 1959. He later did the national company of the heavyweight political drama "The Best Man" with his portrayal of a senator.

The seemingly one-time confirmed bachelor decided to settle down after meeting and marrying Mary Tirony in 1967 at age 43. Prior to this he had been linked with such luminous beauties as Gwen Verdon and Dorothy Malone. The couple had two sons. Parts dwindled down in size in later years and he gained considerable weight as he grew older and balder, but he still appeared here-and-there as an occasional character heavy or hard-ass cop in less-important movies such as Doctors' Wives (1971), $ (1971), The Loners (1972) and Wicked, Wicked (1973).
Minor TV roles in mini-movies also came his way at a fair pace. Towards the end he was seen in such high-profile big-screen movies as The China Syndrome (1979) and Gremlins (1984). Scott had a collapse in 1981 and was diagnosed with pulmonary fibrosis, a progressive respiratory disease. He later relied on an oxygen tank. He died of the disease four years later and was interred at the Holy Cross Cemetery in Culver City, California.

Scott dropped out of high school to enlist in the Navy and got his G.E.D. a couple of years later. At the enlistment station he initially got into the line for the Marines but switched to the Navy when he saw his friends in that line, a decision he thinks saved his life. Similarly, in the Navy he volunteered for gunnery school and was assigned to be a torpedo bomber tail gunner but eventually found himself as a mechanic's mate, another life-saving twist of fate in his opinion.

Scott was a fanatical fan of Notre Dame football and knew many players and coaches personally. For years it was his annual tradition to throw a party for the team at his home in the Hollywood Hills when they came to California to play USC.
According to Scott's son Tim, Scott had a falling out with brother Lawrence Tierney in the late 1960s that lasted nearly two decades.

Scott's brother Edward Tierney became a building contractor after quitting as an actor, and Scott financed several of his projects. One of these includes the apartment building where the infamous Wonderland murders took place.
Scott's father Lawrence Sr. retired to California in the late 1950s and, through his sons, got some work in print advertising.
Was originally offered the part of "Archie Bunker" in All in the Family (1971) but turned it down. The part was eventually played by Carroll O'Connor.

I don't want my boys to be actors. They'd meet too many kinky broads.

The stage is fun, but picture work is easier and a lot more lucrative. Broadway is a gas. But even if you get the work, who can afford it?
Explore the simpler time of yesteryear...
A time when men and women were truly glamorous. A time when you could watch any movie with your children and not have to worry about gratuitous sex or violence – yet enjoy all the lustful inferences and edge-of-your-seat suspense.
Welcome to The Timeless Theater!
We're in the process of identifying which of our films are in the Public Domain, and offering these for sale on DVD.
​Please stay Tuned...!
Check out our new Film Noir Collection:
Coffee Mugs!
Phone Cases!
iPad Cases!
More coming soon!