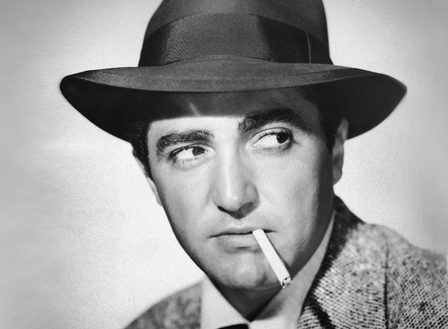 Sheldon Leonard was born in New York City's lower Manhattan, the son of Jewish parents. He studied acting at Syracuse University and, after graduating, landed a job on Wall Street. Following the Wall Street crash of 1929, he found himself unemployed and resolved to become a professional actor on the stage. The road was hard, since it took him five years to first appear on Broadway in "Hotel Alimony" (1934). While this production was universally slammed by the critics, the next plays he appeared in, "Having Wonderful Time" (1937) and "Kiss the Boys Goodbye" (1938), were unqualified successes, the former running for 372 performances.

Movie offers followed, and from 1939 he became one of Hollywood's most recognizable screen tough guys, the names of his characters evocative of the roles he played: Pretty Willie in Tall, Dark and Handsome (1941), Slip Moran in Lucky Jordan (1942), Lippy Harris in Jinx Money (1948), Jumbo Schneider in Money from Home (1953) and, famously, Harry the Horse in Guys and Dolls (1955). There was also an assortment of minor henchmen and western heavies named Blackie or Lefty, and he was Nick, the sneering, humorless barkeeper who tosses James Stewart into the snow in It's a Wonderful Life (1946).

He had a further success with I Spy (1965), championing the cause of racial equality over the (initial) objections of the network by being the first series to have an African-American (Bill Cosby) in an equal co-starring dramatic role with a white actor. Leonard is also regarded as having invented the television spin-off.

The characters Sheldon Cooper and Leonard Hofstadter of the CBS sitcom The Big Bang Theory (2007) are named in honor of him.

He once did a guest appearance in his own show I Spy (1965) (I Spy: Three Hours on a Sunday Night (1965)) playing the villain of the episode, Mr. Sorge.
Explore the simpler time of yesteryear...
A time when men and women were truly glamorous. A time when you could watch any movie with your children and not have to worry about gratuitous sex or violence – yet enjoy all the lustful inferences and edge-of-your-seat suspense.
Welcome to The Timeless Theater!
We're in the process of identifying which of our films are in the Public Domain, and offering these for sale on DVD.
​Please stay Tuned...!
Check out our new Film Noir Collection:
Coffee Mugs!
Phone Cases!
iPad Cases!
More coming soon!