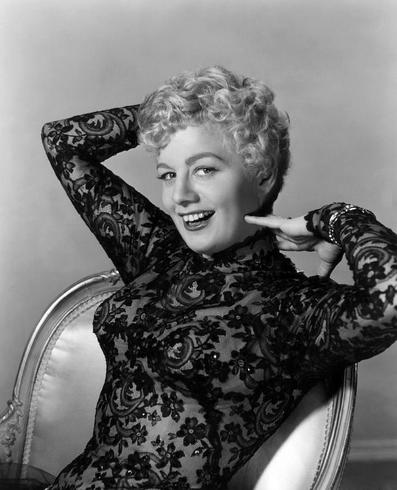 American actress Shelley Winters was the daughter of a tailor's cutter; her mother was a former opera singer. Winters evinced her mom's influence at age four, when she made an impromptu singing appearance at a St. Louis amateur night. When her father moved to Long Island to be closer to the New York garment district, Winters took acting lessons at the New School for Social Research and the Actors Studio.

Short stints as a model and a chorus girl led to her Broadway debut in the S.J. Perelman comedy The Night Before Christmas in 1940. Winters signed a Columbia Pictures contract in 1943, mostly playing bits, except when loaned to United Artists for an important role in Knickerbocker Holiday (1944). Realizing she was getting nowhere, she took additional acting instructions and performed in nightclubs.

The breakthrough came with her role as a "good time girl" murdered by insane stage star Ronald Colman in A Double Life (1947). Her roles became increasingly more prominent during her years at Universal-International, as did her offstage abrasive attitude; the normally mild-mannered James Stewart, Winters' co-star in Winchester '73 (1950), said after filming that the actress should have been spanked. Winters' performance as the pathetic factory girl impregnated and then killed by Montgomery Clift in A Place in the Sun (1951) won her an Oscar nomination; unfortunately, for every Place in the Sun, her career was blighted by disasters like Behave Yourself (1951).

Disheartened by bad films and a turbulent marriage, Winters returned to Broadway in A Hatful of Rain, in which she received excellent reviews and during which she fell for her future third husband, Anthony Franciosa. Always battling a weight problem, Winters was plump enough to be convincing as middle-aged Mrs. Van Daan in The Diary of Anne Frank (1959), for which Winters finally got her Oscar.

In the 1960s, Winters portrayed a brothel madam in two films, The Balcony (1963) and A House is Not a Home (1964), roles that would have killed her career ten years earlier, but which now established her in the press as an actress willing to take any professional risk for the sake of her art. Unfortunately, many of her performances in subsequent films like Wild in the Streets (1968) and Bloody Mama (1970) became more shrill than compelling, somewhat lessening her standing as a performer of stature.

During this period, Winters made some fairly outrageous appearances on talk shows, where she came off as the censor's nightmare; she also made certain her point-of-view wouldn't be ignored, as in the moment when she poured her drink over Oliver Reed's head after Reed made a sexist remark on The Tonight Show.

Appearances in popular films like The Poseidon Adventure (1972) and well-received theater appearances, like her 1974 tour in Effect of Gamma Rays on Man-in-the-Moon Marigolds, helped counteract such disappointments as the musical comedy Minnie's Boys (as the Marx Brothers' mother) and the movie loser Flap (1970). Treated generously by director Paul Mazursky in above-average films like Blume in Love (1974) and Next Stop Greenwich Village (1977), Winters managed some excellent performances, though she still leaned toward hamminess when the script was weak. Shelley Winters added writing to her many achievements, penning a pair of tell-all autobiographies which delineate a private life every bit as rambunctious as some of Winters' screen performances.

The '90s found a resurgence in Winters' career, as she was embraced by indie filmmakers (for movies like Heavy and The Portrait of a Lady), although she found greater fame in a recurring role on the sitcom Roseanne. She died of heart failure at age 85 in Beverly Hills, CA, in early 2006.

Was roommates with Marilyn Monroe when they were both starting out in Hollywood.

Taught Marilyn Monroe how to "act" pretty by tilting her head back, keeping her eyes lowered and her mouth partly opened.

When Shelley and Marilyn Monroe were roommates in the late 1940s in Hollywood, Shelley said that one day she had to step out and asked Marilyn to "wash the lettuce" for a salad they were to share for dinner. When she got back to the apartment, Marilyn (apparently new to the art of cooking) had the leaves of lettuce in a small tub of soapy water and was scrubbing them clean.
Explore the simpler time of yesteryear...
A time when men and women were truly glamorous. A time when you could watch any movie with your children and not have to worry about gratuitous sex or violence – yet enjoy all the lustful inferences and edge-of-your-seat suspense.
Welcome to The Timeless Theater!
We're in the process of identifying which of our films are in the Public Domain, and offering these for sale on DVD.
​Please stay Tuned...!
Check out our new Film Noir Collection:
Coffee Mugs!
Phone Cases!
iPad Cases!
More coming soon!